With Lyme disease in Massachusetts reaching epidemic proportions, we are always keeping abreast of ways in which the instances of Lyme disease can be lowered. We’ve talked about the deer population, the benefits of opossums and various human interventions. But did you know the Red Fox plays a crucial role in holding down Lyme disease rates?

Scientists have found a variety of environmental factors contributing to the cause of Lyme disease’s rapid growth and spread. Through this careful work, they have discovered some clear instances where the natural habitats of rodent predators (such as foxes) have been altered causing a steep rise in Lyme disease. 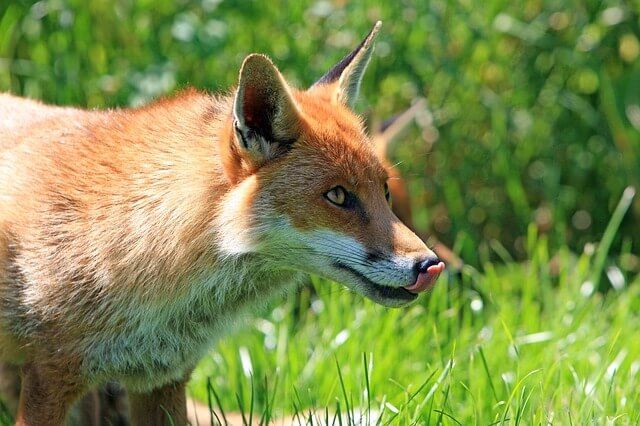 I think not. Red foxes have long been known to be predators of mice. Mice are the main vector spreading the bacteria that causes Lyme to larval ticks nesting with them in their dens. Where there are more Red foxes there are less mice, and fewer mice means lower rates of Lyme disease.

A decrease in the Red fox population is shown to cause an increase in Lyme disease as well.

Scientists studying the correlation also point out that it is not just simply the lower mouse population that decreases Lyme instance. When Red foxes are present, mice stay in their dens more and wander in nature less. This lack of scurrying about wooded areas, lowers the number of ticks a mouse will infect with the Lyme disease bacteria.

While we can’t go back in time and repopulate the Vineyard with Red foxes, some do suggest we bring in a few sterile adult Red foxes to assist with the rising rates of Lyme disease. What do you think?

Don’t wait for the Red foxes to come wander around your property to scare away the mice spreading Lyme. Protect your family and pets from ticks with our 100% satisfaction guaranteed tick control program. Call today!