There are plenty of ticks, deer, and mice in the Southern United States; however, Lyme Disease is much more common in New England and the Midwest.

It is no secret that Lyme Disease, spread by the bite of infected deer ticks, is a large-scale problem in Massachusetts and most of New England. If you haven't experienced Lyme yourself, you know someone who has. But we don't hear much about Lyme in the Southern United States. If you head south for a vacation or have family there, you know first-hand they just don't worry about it. If not, you can see for yourself in the CDC Lyme Disease maps that cases are minimal. Why?

Are there deer ticks in the South? Yes.

Are there white-footed mice in the South? Also, yes.

So, where does the Lyme go?

When deer tick larvae feast on white-footed mice, that is when they can become infected by the bacteria (Borrelia burgdorferi) that causes Lyme Disease. As the tick enters its subsequent phases of life, it feeds on larger hosts such as deer and humans. The deer tick, infected from the mouse, then passes the bacteria onto humans, who then end up with Lyme Disease. 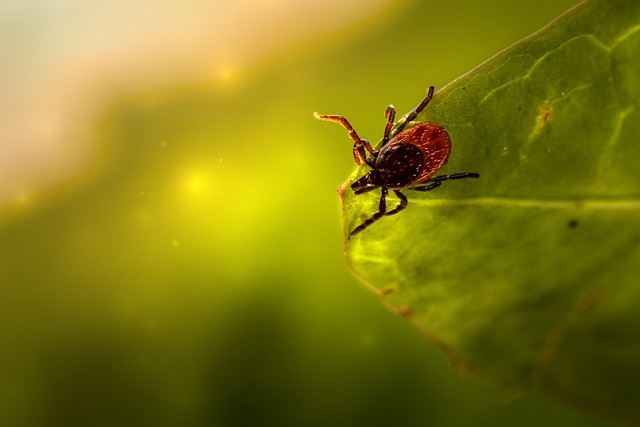 Southern deer ticks congregate under leaf piles and other shady spots to stay cool. Skinks also happen to dwell under those same humid and cool leaf piles. This provides ample opportunity for those lizards to become host to the deer ticks. If/when ticks spend time on top of leaf piles, that is when they may find a mouse as their host.

It turns out that blue-tailed skinks do not harbor the Borrelia burgdorferi bacteria. Without the bacteria passing to the ticks at a high rate, the prevalence of Lyme is much lower in Southern states.

Breaking the chain of transmission is vital to lowering the spread of and risk for Lyme Disease. At Mosquito Squad of Southeastern Massachusetts, our two-pronged tick control approach does just that. While our barrier treatment reduces adult ticks, our tick tubes effectively reduce larval deer ticks while they are nesting with the white-footed mice. This targeted approach means reducing the number of ticks emerging from the dens as bacteria-spreading nymph ticks.

Whether you like lizards or not, you have to admit; they definitely sound more attractive today. If you'd like to reduce the number of ticks on your property for better outdoor enjoyment, be sure to call Mosquito Squad of Southeastern Massachusetts to request your free tick control quote. We look forward to serving you.