Last year we shared the news that the previously well-controlled cattle tick fever was rearing its ugly head in Texas again.

In the mid-20th century, through the use of quarantine zones, state and federal authorities were able to eradicate the disease practically. For the past two years, cattle farmers and state authorities from the Texas Animal Health Commission have been fighting the cattle tick, also called the “fever tick,” all over again.

Fighting Off Fever Ticks in Texas 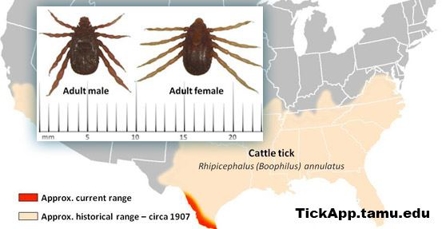 Through the U.S. Department of Agriculture’s Cattle Fever Tick Eradication Program, northern Jim Wells County has been turned into a quarantine area for the purpose of controlling the spread of fever ticks. The ticks were recently found on cattle sold at the South Texas Livestock Market, prompting authorities to turn up the tick control efforts.

The mortality rate of cattle tick fever can be as high as 90% in young cattle with little immunity. If the tick continues to spread the disease it could mean an economic disaster for the Texas cattle industry.

How You Can Help Fight the Fever Tick

While we realize the fever tick is not exactly local, we think it is important information state-wide. If you find a tick that looks new and strange to you, it is vital that you collect it and report it to the Texas Animal Health Commission. Fever ticks can also affect deer and horses and we never know when a tick will make its way north.

If you’d like to eliminate ticks on your property, call today for a free tick control quote.