Mosquitoes are known as the most dangerous animal in the world. Millions of people fall ill from the diseases that they carry every year, and roughly 725,000 of those cases are fatal. Dengue is one of the more prominent mosquito diseases found in the United States, so understanding the severity of this virus is important.

What is the Dengue Virus?

Dengue is a mosquito-borne virus that is spread by mosquitoes in the continental United States. There are four different strands of this mosquito disease, meaning that one person can become infected by this disease four different times in their lifetime. According to the U.S. Centers for Disease Control and Prevention (CDC), approximately 4 billion people live in areas where there is a risk of the Dengue virus. Of those, it is estimated that 400 million are infected annually.

Dengue is a mosquito-borne illness that is transferred through mosquito bites. A mosquito commonly becomes infected with Dengue by biting an already infected person before it feeds on another. When this happens, the mosquito disease is spread to another person, and the cycle continues in this way. A pregnant woman infected with Dengue can pass along the virus to her fetus during pregnancy or around the time of birth. There has only been one case of documented transmission through breastmilk, and mothers are encouraged to continue to breastfeed, despite the risk of Dengue.

Three-fourths of individuals infected with Dengue will not get sick. For those who do get sick, their symptoms generally range from mild to severe.

Mild symptoms generally include fever with at least nausea, vomiting, rash, aches, or pain. Pain generally associated with Dengue include eye pain that is usually behind the eyes, muscle, joint, or bone pains. These symptoms often last anywhere from 2 to 7 days. It is recommended to let your doctor know as soon as you suspect that you may be having symptoms of a mosquito disease.

Mild Dengue can become severe within a matter of hours. If someone is experiencing severe Dengue symptoms, seek emergency medical treatment as soon as possible.

Severe cases of Dengue occur in 1 of 20 patients who develop mild symptoms with a fever. If you have had one of the Dengue viruses before, you are more likely to have a more severe case. Infants and women are at a higher risk of developing severe Dengue. Warning signs of a severe case of Dengue start within 24-48 hours after the fever has gone and include belly pain and tenderness, vomiting (at least three times within 24 hours), bleeding from the nose or gums, vomiting blood, blood in stool, or feeling tired, restless, or irritable.

For mild Dengue treatment, it is recommended to have as much rest as possible, drink plenty of fluids to remain hydrated, and take acetaminophen to control fever and relieve pain. It is highly advised not to take aspirin or ibuprofen.

A trip to your healthcare provider or emergency room is necessary for severe Dengue treatments. Severe Dengue is considered a medical emergency and should not be taken lightly.

There is a new Dengue vaccine that is still in development. This treatment is only for children aged 9 to 16 who have had Dengue and live in endemic areas and are likely to be exposed again.

In most cases of Dengue, the prognosis is usually good. The illness's worst symptoms generally last 1 to 2 weeks, and full recovery is expected within a couple of months at most. Mild cases of Dengue have less than a 1% fatality rate, though severe cases have a higher fatality rate of 2.5%. 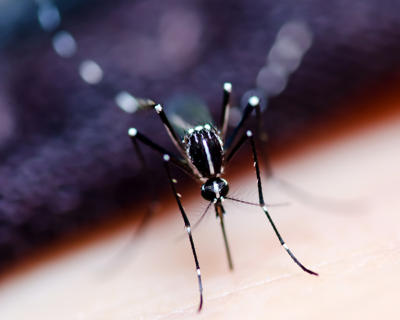 Rainy seasons are peak times for Dengue transmission due to the abundance of water, and the female is more likely to reproduce. Traveling to areas with Dengue outbreaks adds a higher risk of becoming infected. The Americas, Africa, the Middle East, Asia, and the Pacific Islands are areas to monitor if traveling.

Dengue viruses are transmitted to people through the bite of infected Aedes mosquitoes. These Ae. aegypti or Ae. albopictus are the prominent carriers and are the same species of mosquitoes that carry other viruses like Zika or chikungunya.

Be proactive in protecting yourself and your family from mosquitoes when you're outdoors. This means wearing long sleeves and pants and using bug repellent. The Mosquito Squad of Las Cruces offers 7 T's of mosquito control to help you protect your property.

The 7 T's of Mosquito Control:

Calling the experts at Mosquito Squad of Las Cruces is the best approach to protect yourself from mosquitoes. Our Traditional Barrier Mosquito Treatment employs a tried-and-true mosquito control technology that forms a subtle barrier around your property. This treatment is effective for three weeks and can eliminate mosquitoes on your property by up to 90%. When you're ready to defend your yard against mosquitoes, call the Mosquito Squad of Las Cruces.

Are you ready to reduce your risks of contracting Dengue from those mosquitoes in your backyard? Start by following the 7 T's of mosquito control to reduce mosquito breeding areas in your yard. The next step is to hire the professionals at Mosquito Squad of Las Cruces. The traditional barrier treatment can reduce mosquitoes by up to 90%. Contact us online or call us today for your free Las Cruces mosquito control quote.