All summer long, the media has been buzzing about the Zika virus and the mosquito that spreads it, Aedes aegypti. It seems like these topics are in the news all the time, but many people still have a lot of questions about the species and its habits. Based on information from the Centers for Disease Control and the World Health Organization, here are the answers to some of the most frequently asked questions about the Aedes aegypti mosquito.

How do you pronounce Aedes aegypti?

As with all scientific names for species, Aedes aegypti is a Latin name. This means there is some debate over its correct pronunciation. However, there is a commonly accepted pronunciation used by news outlets, public health officials, and even the director of the CDC. That pronunciation is: AY-dees uh-GYP-tie. Still, there are a few slight variations, depending on who you ask. For instance, Merriam Webster’s voice recording pronounces the word Aedes in three syllables: ay-EE-dees.

The CDC describes the Aedes aegypti as a “small, dark mosquito with white lyre-shaped markings and banded legs.”

Where does Aedes aegypti live? Is it found in DC, Maryland, or Virginia?

Aedes aegypti originated in Africa, but it has since spread, mostly in tropical, subtropical, and some temperate parts of the world. They have been detected in the continental United States.

This map from the CDC shows the estimated range where Aedes aegypti have been found. Note that they are primarily located in Southern states, but they can climb as far north as Connecticut. 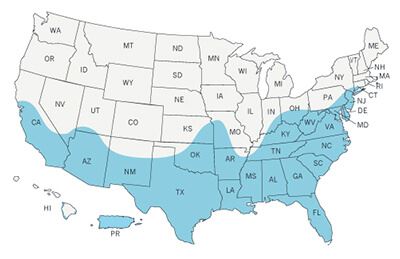 The first case of local transmission in the United States (not caused by overseas travel) was reported in Florida. There is also a documented population of Aedes aegypti mosquitoes on Capitol Hill in Washington D.C.

How Far Can Aedes Aegypti Fly?

Studies about Aedes aegypti‘s flight range suggest that females stay near their original home, flying an average of 400 meters.

When & Where Does It Prefer to Bite?

These mosquitoes bite during the day, and they are most active two hours after sunrise and a few hours before sunset. However, they can bite at night as well. They typically approach their victims from behind and bite the ankles and elbows. They prefer humans, but they do also bite dogs and other mammals.

How Long Does It Live?

What Is Its Life Cycle?

Female mosquitoes lay eggs in water-filled containers, just above the water line, over several days. These eggs can survive for periods of six months or longer, even if they dry out temporarily. However, they cannot live through the winter in cold climates. When the eggs are flooded with water from rain, they hatch. Aedes aegypti larvae tend to eat small aquatic organisms, algae, and other plant and animal particles. After hatching, they grow into adults in as little as 8 days.