I grew up in Haines, Alaska, and this is a mosquito origin story from the Tlingit people of Southeast Alaska, who live in Klukwan, on the Chilkat River. While Southeast Alaska is about as far from Central Texas as you can get (in so many ways), it provides a good explanation for the mosquito's ever hungry nature. 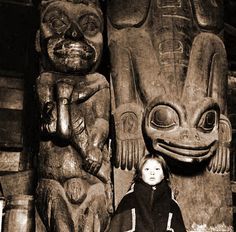 Many years ago on the mountain above Klukwan lived a giant. The giant would come down into the fish camp and steal the salmon from the drying racks. This angered the villagers, and made them thin and hungry. When the fish were gone, the giant began hunting and killing the villagers for food. It killed and ate many people. They were afraid to leave their homes and fearful for their children. They tried to kill it with spears, but the spears just bounced off the giant’s thick skin.

The villagers called a council to decide how to get rid of the giant. They tracked the giant up the mountain, and into the woods. Soon they saw a large community house with blood red smoke rising from the chimney. They knew this was the cannibal’s home. They decided to build a trap, like the hunters do for grizzly bears. They dug a deep pit, and lined the bottom with a tough sinew net. The hole was very deep, deeper than for a grizzly bear, and they covered it with branches and twigs to match the forest floor. Early in the morning, the villagers sent a fast and light hunter to the giant’s home to draw the enemy out. The hunter, chased by the cannibal, ran lightly over the top of the trap. The heavy giant crashed through the poles and branches and snared himself in the net at the bottom. The villagers filled the pit with wood and soaked it with fish oil. When they brought the torches, the cannibal realized what they intended. He roared out that they did not have the power to kill him and even burned to ash he would feed on them. To stop the cannibal from keeping his promise, the villagers kept the fire burning for four days and four nights. On the fifth day, the fire had burned down to ashes. The villagers took a long pole and stirred the ashes to make sure nothing remained of the giant. As they stirred, ashes and sparks flew into the air, and changed into mosquitoes which dived at once, biting and feeding on the villagers’ blood. The cannibal giant’s promise was fulfilled, and he returns today to feed on the blood of people.