Are you wondering why the stink bugs have suddenly started invading your space? We are here to share some significant facts about them and how to keep them from ruining your winter.

What is a Stink Bug, and is That a Nickname?

Stink bugs are flying pests that can destroy our gardens. They generally have gray, green, or brown colors and a shield-shaped body. The Brown marmorated stink bug is the most common nuisance during fall and has some significant differences from others. They are usually on the larger side of the scale at about 5/8-inch long. According to Entomology at the University of Kentucky, they have a marbled pattern on their back and white and black banding on their legs, antennae, and the edge of the abdomen. Their technical name is the Halyomorpha halys, and stink bug is a nickname given to them due to the pungent smell they give off when smashed or threatened.

Are Stink Bugs Native to the United States?

Stink bugs are not initially from the United States. They are native to areas such as China, Japan, Taiwan, and Korea and were somehow accidentally transported to the U.S. in the 1990s. The brown marmorated stink bug was first noted in Pennsylvania in 1998 as the first U.S. appearance and has since been reported in at least 46 states, with the middle east being the most highly affected area.

Are Stink Bugs Harmful to Humans, Pets, or Homes?

Stink bugs are generally harmless to humans and pets. Although, some people could have an allergic reaction to the chemicals they release when they are smashed or threatened. During early fall, they will congregate on the outside of homes or inside near doors and windows. You may see them in your yard under fallen leaves or other vegetation. They will not cause damage to the structure of your home and only reproduce outdoors. The biggest issue with stink bugs is they are herbivores and love to eat plants, such as soybeans, tomatoes, beans, corn, peppers, and many more. They also enjoy snacking on trees and shrubs, such as crabapple, maple, oak, and many others. When they infest agricultural areas, they can wreak havoc on the crops. In some areas where they have multiplied their numbers, they can enter buildings by the hundreds or even thousands. 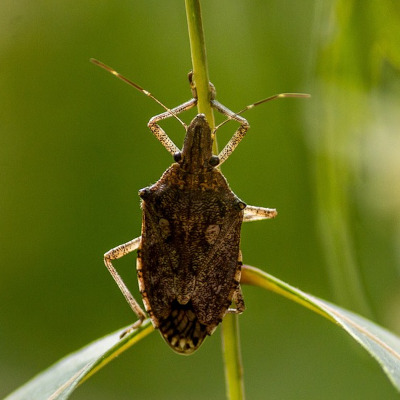 The brown marmorated stink bugs will try to find shelter for winter, commonly known as overwintering. They go into a state called diapause, which is like hibernation. Their metabolism slows, so they can go dormant while their primary sources of food are unavailable. They can find their way into your home through cracks or gaps in your foundation, windows, or doors. Once they find a suitable shelter, they will release a pheromone to attract friends and family to join them in diapause. They tend to go towards natural materials, meaning they will hide under rock crevices or tree bark during diapause. This can cause an issue if your home is made of some of these materials, leading them to believe it is the perfect place to inhabit.

The brown marmorated stink bugs are strong fliers and can travel more than a mile to new locations. They have been known to find their way onto vehicles to be transported from one place to another, spreading them further throughout the United States. If you tend to leave your outdoor lights on overnight, you may want to rethink it if you have a stink bug issue since they are attracted to the bright lights.

Whatever You Do, NEVER Smash a Stink Bug

When you Smash one of these stinky pests, they release a chemical as a defense mechanism that is offensive to our senses and attracts other stink bugs, making it more challenging to get rid of them. It is highly recommended not to touch them with your bare skin, as the chemicals they release could be an irritant. Also, recent clinical studies suggest BMSB may be an important airborne allergen to people. Individuals plagued by stink bugs may suffer irritation and inflammation of the eyes and nose, similar to the reaction some have from exposure to the Asian lady beetle. People experiencing such symptoms in dwellings with many stink bugs should consult their physician.

Stink bugs generally will reproduce a single new generation each year. However, if the spring and summer are extra warm, they could produce up to three new generations of up to 400 eggs. During the warm season, the female stink bugs will attach clusters of eggs to the bottom of leaves or on stems. The nymphs hatch without wings and go through five stages before gaining wings and becoming full-sized adults. Adult stink bugs have an average lifespan of about 6 to 8 months. This is highly dependent upon the food sources available, weather conditions, and predators in the area. Some common predators of stink bugs are birds, bats, and spiders.

How Do I Get Rid of Stink Bugs in My Home and Yard?

First, you want to take steps to reduce their ability to enter your home. Ensure your foundation has no cracks or crevices and your windows and doors have proper seals. You should then call the professionals at Mosquito Squad of West St. Louis County. We offer a Protective Barrier Treatment around your yard and the exterior of your home to help reduce the number of stink bugs entering your home.

Are you ready to reduce the number of stinky critters entering your home for the winter? You can choose from the Exterior Home Package, the Elite Package, or the Winter Protection Plan Package. Call Mosquito Squad of West St. Louis County at (636) 735-7132 for all of your stink bug control needs.