The Squad Gives Back

As mosquito control experts, we know that mosquitoes are much more than a nuisance. These creatures carry deadly diseases, with the most common being malaria. Shockingly, they kill over 725,000 people each year. The most frustrating aspect about these creatures is many of their victims could have been saved by basic preventative techniques.

The United States eradicated malaria 50 years ago. However, over 250 million Africans contract malaria each year, resulting in the death of over 1,000 children every single day. Most of them are under the age of five. Each year, mosquitoes take the lives of countless people and constantly provide the threat of disease. Mosquito Squad has decided to bring its fight across borders to make a difference in the lives impacted most by mosquitoes.

Our Partnership with Malaria No More 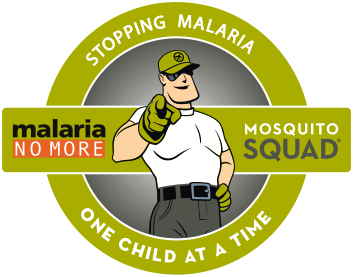 Over seven years ago, Mosquito Squad forged a relationship with Malaria No More, a nonprofit global health organization with the goal of ending malaria deaths in Africa. While we fight the bite every day as a convenience for our clients here at home, we understand that for many, the fight against the bite is much more important—it is a matter of life and death. Community has always mattered for Mosquito Squad. From customer service to global activism, our goal is to make be a positive influence in as many lives as possible.

Since 2012, Mosquito Squad’s efforts have raised over $450,000 to help fuel the fight against malaria. When we donate a portion of our sales to Malaria No More, we’re saving lives by supporting activities in Cameroon to ensure adequate, timely and widespread communications that help inform school-aged children and communities regarding protective bed net distributions and proper usage.

Please join us in the fight against malaria by donating alongside Mosquito Squad at SwatMalaria.net. Any dollar amount can help by funding important educational activities and, ultimately, saving lives by preventing the citizens of Cameroon from contracting malaria. The only good mosquito is a dead one—and we won’t stop fighting these vile creatures!