When you think of the earth's most beautiful creatures, we're confident a mosquito never comes to mind. We're prepared to change that today by introducing you to the Sabethes cyaneus mosquito. Native to tropical forests, this particular mosquito is a sight to behold.

Its coloring is an eye-catching, iridescent blue. As if that weren't enough to garner attention, the Sabethes cyaneus has two legs covered in little hairs that look like feathers. 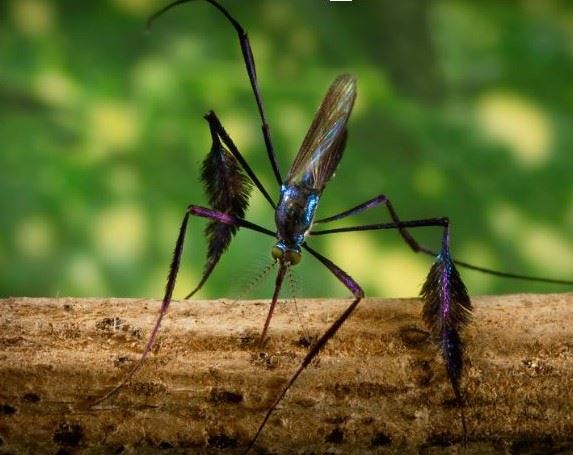 The Sabethes cyaneus can be found in tropical forests ranging from Belize to Argentina. Their development process is the same as the more commonly known genus of mosquito, Aedes, in that the Sabethes cyaneus evolves from eggs, to larvae, to pupae. The Sabethes cyaneus lays its eggs in tree holes, the hollows of bamboo plants, and even fallen banana leaves that are filled with water.

Their flair for theatrics becomes apparent when mating. The male Sabethes cyaneus does an elaborate dance to attract the female's attention. Once pregnant, the female Sabethes cyaneus lays her eggs in an interesting way. While in flight she shoots her egg into a water source, all the while combining typical flight behavior with elaborate leg movements.

Based on their appearance and performative mating habits, it's easy to see why the Sabethes cyaneus is one of the most beautiful and dramatic insects within our ecosystem.

If the mosquitoes in your backyard are less appealing to look at, and are causing frustration with their bites, contact your local Mosquito Squad today!