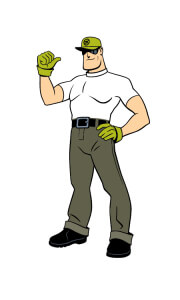 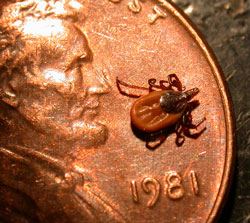 Lyme disease begins its journey to us by an infected deer tick. The ticks themselves actually get the disease from mice, and not deer, contrary to popular belief. The deer tick feeds on the mouse which is carrying the bacteria and thus becomes infected and able to transmit the disease to people by feeding on us. These same ticks like to feed on deer as well. The deer tick is also known as the black-legged tick, and bear tick  in some areas around the country. Lyme disease is then spread to people from the saliva within the tick, during feeding. This disease can start to display symptoms in as little as two days following the onset of infection through the tick bite. Symptoms can include rash at the sight of the tick bite and other areas of the body, fever, chill, sore throat, ear aches, swollen glands, joint pain,  headaches and stiffness in the neck.  Lyme disease is most successfully  treated early, and if left undiagnosed can lead to heart and nervous system disorders, or an acute form of the disease known as chronic Lyme disease or post Lyme disease syndrome. If you or a loved one feels they have been bitten by an infected tick, early detection and diagnosis is key. Always contact your physician at the first sign of illness.

Of course, the best way to avoid tick-borne illnesses such as this is to avoid being bitten by a tick altogether. Exercising common sense is a good starting point, such as avoiding deep, wooded areas where tick infestations are more likely to be present. Monitoring yourself with frequent tick checking following each exposure to the outdoors, and keeping the areas around you home and yard free of thickets, debris and overgrown foliage. Instilling the expertise of a licensed professional to mist and use a tick abatement device is also recommended. 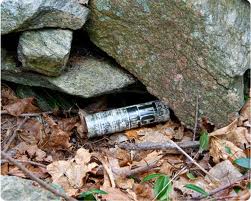 Mosquito Squad of Mt. Laurel uses barrier misting to kill ticks and Damminix tick tubes as part of their tick abatement program. These tick tubes work by killing the ticks at their source. Each tick tube contains cotton treated with permethrin. Permethrin is safe for humans and mammals, but kills the tick. The mice use this cotton in their bedding, and thus exposes the deer tick to the permethrin and kills the tick-stopping the cycle of disease before it can be transmitted to our pets, or us. Damminix tick tubes are environmentally friendly, and are approved by the EPA (Environmental Protection Agency). Field studies and extensive testing tells us these tick tubes reduce the chance of you or your family being exposed to a potentially Lyme disease carrying tick by 10 fold.

To Learn more about Damminix tick tubes, and our barrier treatment contact Mosquito Squad of Mt. Laurel,we can come up with a customized strategy to keep you and your family safe from ticks  the entire season. Call us at (856) 300-6146!