Were you aware that since the 1980s mosquito season has risen by 20-40 days in many of the United States major cities due to climate change? And of those cities measured Worcester was number 9 with 30 more average days of mosquitoes per year.

That’s an entire month longer! An entire month of more bug repellent, more swatting, more scratching, more worrying about a mosquito-borne illness. Heat is not the only factor that has contributed to this unpleasant phenomenon. Water… mosquitoes love water. Mosquitoes hatch in water. More often now than ever, we see longer drought periods followed by deluges of rain. With the hard fast rain, there is more standing water and water collecting in planters, tires, and flower pots: places that female mosquitoes love to lay eggs. Once these eggs are present, the Natural Resources Defense Council says they may also hatch faster and more frequently due to the heat.

Simply stated, we now have more mosquitoes buzzing around for a longer period of time. 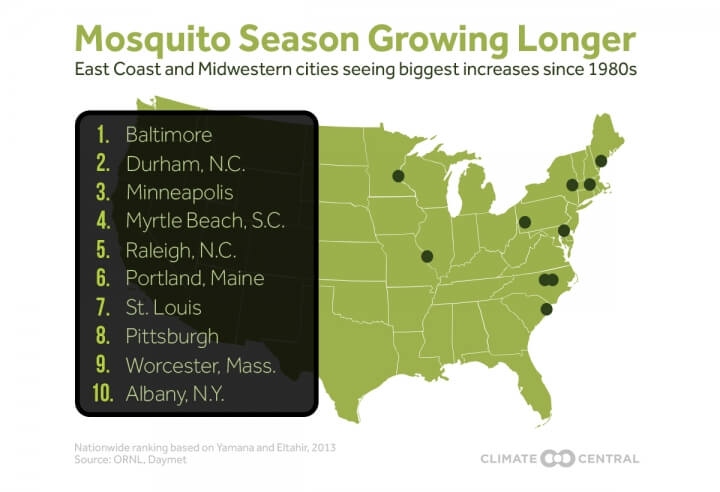 The talk of mosquito-borne illnesses seems to be at a new high this summer. The Zika virus makes the news daily. Zika and the Olympics created many concerns over the last few months. However, the latest news is much more worrying for the U.S. than before. With the first instances of Zika transmitted by a mosquito to a human in the United States occurring in Miami, we are on a much higher alert. West Nile Virus and Eastern Equine Encephalitis are the primary mosquito-borne diseases in the Northeast, but we may face a risk for Zika as well. And the bottom line is a longer season will make more chances for any of these possible. Worcester mosquito control is more important now than it ever was.

Control is Our Responsibility

We are living with the effects of climate change. Every one of us should be doing the small things we can to slow these effects, but we also have to deal with the consequences that already exist. Mosquitoes are becoming a growing concern. Bug mist and citronella candles are just not going to cut it when it comes to Worcester mosquito control any longer. We have to be diligent in making sure our yards are not mosquito breeding grounds. Follow the 5Ts of mosquito control and take the steps to educate your community as well. Eliminating the problem is something we should all work on together. Mosquito Squad of Worcester wants to help with this too. We can eliminate 85-90% of the mosquitoes in our year with our barrier treatment. Call us and let’s work together in making our environment a safe place to live and enjoy.