Everyone has had that moment, you’re gearing up to enjoy the outdoors, grab your mosquito mist of choice, and then go about dousing yourself for a solid 5 minutes before commencing that hike around the lake, barbecue in the backyard, or other summer activity. Then, not even 2 hours later, you find yourself being swarmed by blood sucking mosquitoes intent on devouring every inch of exposed skin despite the more than adequate amount of repellent applied. 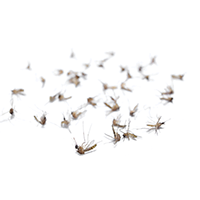 You aren’t going crazy though, that mosquito repellent that claims to last 8+ hours has probably stopped protecting you from the primary types of mosquitoes found in North Carolina. A recent study conducted by Consumer Reports discovered that while most mosquito repellents maintain their effectiveness against west nile carrying deer ticks for as long as 8 hours, these same sprays fend off mosquitoes like the Aedes Aegypti & Aedes Albopictus for just a single hour or as short as 30 minutes in some cases. Both species of mosquitoes represent the primary cause of the spread of mosquito borne illnesses in America.

If you’ve been looking at all natural mosquito repellents as an alternative, you may actually be sacrificing a significant amount of both protection and effectiveness. There has been much debate concerning the safety of DEET, and while the Consumer Reports study found that most DEET based products performed consistently with their stated effective period, you do have a couple other non-DEET options available. The study found that Sawyers Fisherman’s Formula, a product in which the main ingredient is 20% picaridin, and Repel Lemon Eucalyptus, another non-DEET based product with 30% oil of lemon eucalyptus, both effectively kept mosquitoes and ticks at bay for a period of at least 7 hours.

The general rule is to only use mosquito and tick repellent when necessary, and to use it sparingly, especially with young children and the elderly. This recommendation should be applied to all-natural repellent solutions, as well as any DEET based products used, the latter of which has been considered by the EPA to “not present a health concern to the general population” and is approved for use on children of all ages. Widely recognized as a product that mostly depends on your personal preference, the use of repellent becomes continually more vital to your everyday safety with the threat of mosquito borne viruses such as Zika and West Nile. 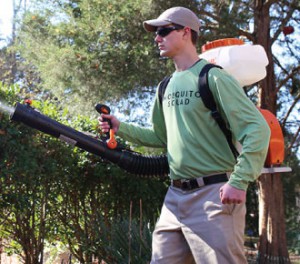 However, misting yourself down with smelly oily repellent every time you step outside isn’t your only option, and not even the most effective option. As technology in the field of mosquito protection has continued to evolve and expand, options such as the use of mosquito barrier sprays continue to prove their effectiveness for protecting homes, backyards, and even special events in outdoor venues. At Mosquito Squad, we excel at providing customers throughout the Triad area with protection from annoying and potentially dangerous mosquitoes and ticks on a regular basis. We’ve protected countless homes throughout the suburbs with our especially popular Barrier Treatment treatments that keep mosquitoes and ticks away for periods as long as 21 days. Whether you are looking for a one time mist for your next barbecue, or to setup a treatment program for your property, we’re the authority on mosquito and tick protection. Reach out to us at mosquitosquad.com/triad or call us at 336-793-8463.