What’s NOT going to happen in the year 2020? First, there’s the coronavirus pandemic and then… send in the Murder Hornets!

I don’t think anything could sound much more 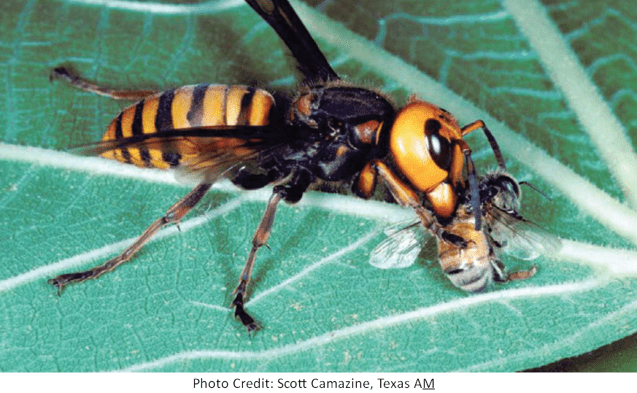 frightening and, at the very least crazy painful. A female Vespa Mandarinia, aka “murder hornet,”can actually grow to be about an inch and a half long and has “large biting mouthparts that enable it to decapitate its victims”. So yes, a sting from this hornet is crazy painful, but humans are not the target.

Murder Hornets are Not Out to Get Humans

Humans can let their breath out. These big ugly hornets actually only kill a few dozen people a year and none EVER in the United States. In fact, bee stings from any type of bee or hornet kill about 62 U.S. citizens a year. Relatively speaking, neither bees or murder hornets are particularly deadly. We’ve actually been through this before. In the ’70s, the “killer bees” were coming. Did they ever show up and cause large numbers of deaths?

There is a concern about this predator making its way into the United States, but it is the honeybees that we have to protect, not humans. A murder hornet can obliterate an entire hive, and we all know that we need our honey bees. Beekeepers and U.S. Agricultural Agencies alike are taking quick and serious action to control these nasty creatures and protect our helpful honeybees.

Mosquitoes are the Bigger Threat

Now let’s talk big numbers. Millions and billions. The World Health Organization says that millions of humans are killed by mosquitoes every year. In an interview with historian and mosquito expert Timothy Winegard, CBS news correspondent Michelle Miller reported that over the course of humans’ time here on Earth, mosquitoes have killed billions of people. Billions.

The mosquito scoffs at the murder hornet and every other deadly animal on the planet. According to the Bill Gates foundation’s chart of the deadliest animals, sharks kill a measly ten humans a year, and crocodiles make it up to a thousand. Worldwide. Truly, humans killing humans are the only beings that come close to the mosquito’s murderous reputation, and we still trail by hundreds of thousands.

Just last year, three people in Massachusetts died from Eastern Equine Encephalitis. Between 2009 and 2018, Massachusetts had the 2nd most cases of EEE in humans. We mention EEE specifically because while rare, it is one of the most dangerous diseases carried by mosquitoes.
Last year was a high-risk year for EEE, and with a mild winter and wet spring, that risk remains. EEE is just one of the dangerous diseases that mosquitoes carry. Remember to keep an eye on mosquitoresults.com this year as mosquito season develops.

We have to stay aware of the actual dangers that we face in the outdoors and not let crazy nicknames like “Murder Hornets” distract us. Washington Agriculture Department entomologist Chris Looney says, “They are not ‘murder hornets.’ They are just hornets.”

When stories circulate and throw out big scary names and tales of large stingers and “biting mouthparts,” it is hard not to get a little wound up. However, before you go and hide underground, a little fact-checking goes a long way.

On the same note, continuing to be diligent in avoiding bites from a real proven enemy will go even farther. Insect repellent, professional mosquito control treatments, and continuous yard clean up are vital. These are the activities that will keep the real monsters away, and those monsters are the mosquitoes. Let us help you. At Mosquito Squad of Southeastern Massachusetts, we can eliminate up to 90% of mosquitoes on your property. Call us today for a free estimate.