The Zika Virus reclaimed its top spot in the news cycle last week for a few days. It all started when the CDC reported that the dangers of the Zika Virus are worse than they originally suspected. Researchers have uncovered more birth defects and other health complications linked to Zika during their efforts to create a vaccine and learn more about the virus and its health effects. The new discoveries are farther reaching geographically and demographically speaking.

An outbreak of Zika Virus in Brazil coinciding with an increase in microcephaly in area infants shined a bright light on the Zika Virus. Since then, researchers have been meticulously at work to confirm that indeed Zika infections during pregnancy were the cause of the microcephaly. This week the CDC confirmed the suspicion that microcephaly can indeed cause microcephaly in infants. They also pointed out that not all infants will be affected and research continues to determine the level of risk. These studies will include the risk of other birth defects linked to Zika Virus.

The CDC recently updated the geographical distribution maps for the two mosquitoes (Aedes Aegypti & Aedes Albopictus) suspected of being the primary vectors of the Zika Virus. This adjustment has increased the affected states to 30 from the previous 12. While Massachusetts was already on the northern end of the distribution map, you can be sure that if the mosquitoes are spreading they are also multiplying. 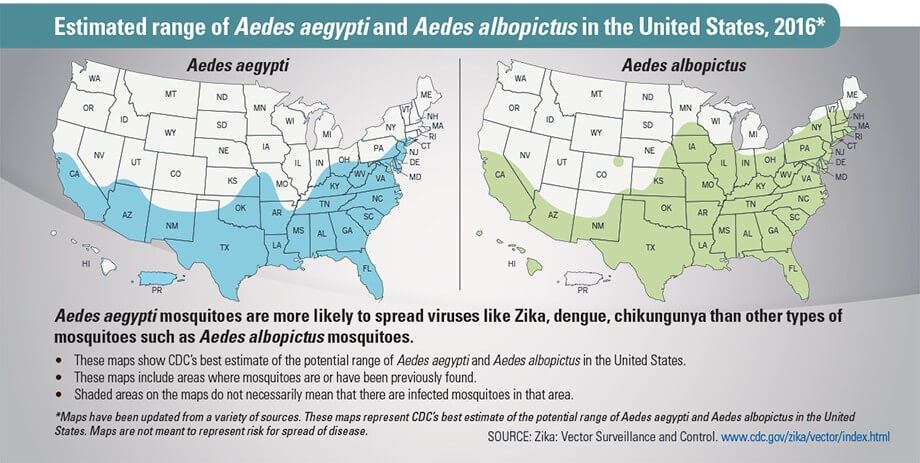 While most of the news on the Zika Virus and its dangers have been focused on pregnancy and infants, more health complications have been discovered that can affect anyone. More research needs to be done to confirm the link, but Zika Virus is thought to have led to increased cases of Guillain-Barre syndrome and acute disseminated encephalomyelitis (ADEM). Both are auto-immune disorders where the patient’s immune system mistakenly attacks its own body. The neurological implications of this connection has the health community on pins and needles as more research is underway.

It is imperative to continue to follow the CDC’s travel guide for pregnant women as well as their advice for couples thinking about pregnancy. The Zika Virus is sexually transmitted, making it important for everyone exposed to exercise added precautions.