In Massachusetts, we don’t necessarily need a specific month to be aware of Lyme Disease. We’ve been painfully aware of Lyme disease for quite some time. This CDC map shows Massachusetts is in the top seven states for Lyme cases over a 28-year period.

And yet, May is Lyme Disease Awareness month, shining a light on the challenges of Lyme Disease. Knowing about Lyme Disease and how it is spread allows individuals to control their health should it strike.

From complicated diagnosis and treatment to varying symptoms in patients suffering from Lyme, everyone’s challenges are different. Coping styles are different. However, pain and suffering are quite real for many and can last for years. During Lyme Disease Awareness Month, Media Entertainment Arts Worldwide is using its online presence to highlight the personal Lyme Disease struggles of famous people to help spread awareness. Let’s take a look.

Who Is Suffering From Lyme Disease?

Amy Tan, famous for her books The Joy Luck Club and Valley of Amazement, suffered symptoms for years before being diagnosed with Lyme Disease. Tan suffered what she thought, in the beginning, to be the flu in summer. However, over the next four years, she had a multitude of strange and various ailments. Joint pain, muscle aches, headache, nausea, and seizures eventually became so severe that she couldn’t write a paragraph or put a single thought together.

Even though she suggested testing for Lyme, it took four years to find a doctor that recognized the signs and gave her an antibiotic to treat the disease. Amy Tan uses constant antibiotics to control her symptoms and knows that her body has been damaged permanently. She is the co-founder of LymeAid 4 Kids, an organization that pays for treatment for uninsured children. She also uses her voice to speak about the disease in hopes of raising awareness of misdiagnosis and lack of research.

"We need to revise the guidelines based on new research and the plight of those who have suffered from the disease, some of whom have lost their jobs, their homes, their marriages, and even their lives. I await the day when there is a new standard for diagnosis, treatment, and insurance coverage. Only then will I be able to confidently say to those desperate people who reach out to me: 'Don't worry. You'll soon be well again.'"

A pop star in the ’80s, Debbie was diagnosed with Lyme Disease in 2013. She had traveled across the country as well as across the sea and had no real idea that she could have picked a tick up along the way. As she began to suffer from strange symptoms, some flu-like, others cognitive, and even some food sensitivities, it didn’t occur to her doctors to test for Lyme Disease since it’s not prevalent along the west coast.

She continued to lose weight and suffer from a variety of health issues, including headaches, chills, fever, nerve tremors, even nightmares. She was exhausted and depressed when her GI doctor finally ordered a Lyme test. Unlike Tan, Gibson has chosen not to stay on antibiotics and takes a more holistic approach to her treatment; however, she too knows that she is permanently affected by the disease.

Even in 2019, when on the popular tv show Dancing with the Stars, Gibson’s dance partner stated that somedays, her muscles would just be too tired to dance due to the Lyme disease. Debbie chooses to live with Lyme by listening to her body. “I can’t be cavalier with my body. I can’t just push myself without thinking what happens next. [Lyme Disease] can affect my stamina. I’ve always been in tune with my body. But the last few years have helped me learn where I can push my limits. I’m going to choose to think of that as an advantage!" Lyme changed her immune and nervous system permanently, but she continues to work and move forward by listening to her body and knowing her limits. 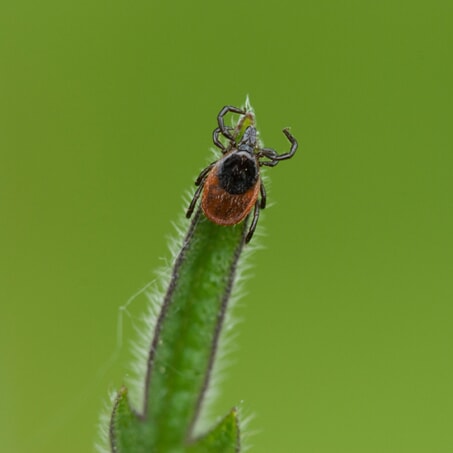 The Importance of Avoiding Tick Bites

The ticks that transmitted Lyme to Amy and Debbie didn’t care that they were famous. The ticks that carry Lyme disease in Massachusetts don’t care that you are not famous. We are all susceptible to the disease. We all have to take precautions when it comes to protecting ourselves and our families from tick bites.

A second important reminder is that a tick has to be attached for 24-48 hours to pass along the disease. Tick check, tick check, TICK CHECK!! We can’t emphasize that enough at Mosquito Squad of Southeastern Massachusetts. If you’ve been outdoors, a tick check is the #1 task upon going back indoors.

It is to your benefit to eliminate ticks on your property. We would like to help you with that. Call us today and we can tell you more about our tick control program.