Have you ever heard of cattle tick fever? If you had lived in this area during the late 1800’s or early 1900’s you probably would have. It was during this time that the entire US cattle industry was greatly affected by cattle tick fever and suffered devastating economic losses.

The mortality rate among young cattle that have no immunity and have not been treated against cattle tick fever can be as high as 90%. So why haven’t you heard of it? After such a great financial loss, ranchers along with state and federal authorities worked together to push the tick that carries the disease back towards the Mexican border and create a permanent quarantine zone that still exists in Southern Texas. By close to the mid-1900s the ticks that carried cattle tick fever was practically eradicated. But it appears they are making a come back. 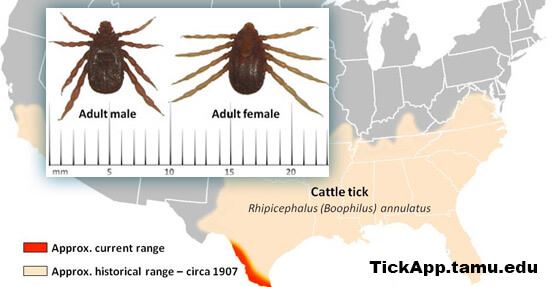 What Is Causing the Return of Cattle Tick Fever?

Cattle tick fever is caused by a microscopic parasite, either Babesia bovis or Babesia bigemina. It is commonly known as Babesiosis. The parasites attach and destroy the animals red blood cells causing acute anemia, high fever, and enlargement of the spleen and liver. In Texas, cattle tick fever is spread by the bite of an infected cattle fever tick (Rhipicephalus annulatus).

The African Nilgai, an exotic free-ranging antelope, seems to be the culprit. In Cameron County, Texas a large amount of these animals have been found living on wildlife protected federal land and this is also where the first major rise in tick numbers has been found.

The antelope was brought into Texas as prey to be placed on exotic hunting ranches. However, some of their basic traits created problems. They are large, some as big as a small horse. They are hearty and quick and stay on the move, searching for the best next meal. Also, there are few natural predators for the African Nilgai in Texas, so they have grown in numbers.

This growing population of antelope carries two types of tick that carry cattle tick fever. An infected tick will spread the disease by laying eggs and dropping them along the ground. So as an animal that carries many of these ticks is moving quickly and all over Texas it is dropping infected eggs as it moves.

How Can We Stop Cattle Tick Fever?

Southwest Farm Press online reports several organizations are working together as the fear of cattle fever ticks moving north grows. Quarantine areas have been stretched, and treatment regulations have been strengthened in recent months in efforts to keep these ticks from moving. There have also been stricter guidelines concerning grazing and movement among cattle.

While state and federal health officials find stronger regulations necessary, ranchers are finding them to be time-consuming and a terrible financial burden. The Texas and Southwestern Cattle Ranchers Association and the Texas Animal Health Commission have been having conversations about the necessities of treatment and how it affects profitability for ranchers. Controlled burns, ivermectin laced corn set out for white-tailed deer, and more hunting opportunities for the antelope and deer that can carry ticks that spread the fever are also suggested to combat the growing problem.

Keeping cattle safe is a huge undertaking and important to the entire financial structure in Texas, and this is why so many organizations are involved in this issue. So you may be thinking there isn’t anything you can do. Not true. We can all do our part in keeping the tick population down by simply keeping it down in our own yards, no matter how small. By following the 6Cs of Tick Proofing your yard, you not only rid your yard of ticks but you eliminate the possibility of them traveling out of it into other places.

At Mosquito Squad of South Central Texas, we want to help you with this process. Our barrier spray will eliminate up to 95% of existing ticks in your yard on contact. Our tick tube system continues to work all year long, keeping nymph ticks from ever even making it out into your living spaces. Let us tell you more about how these systems can help you contribute to the entire effort of eradicating the ticks that cause cattle tick fever. Call us today at (830) 254-5176.