Get A Free Quote
Mosquito Facts

Important Things to Know About Mosquitoes in Kentucky 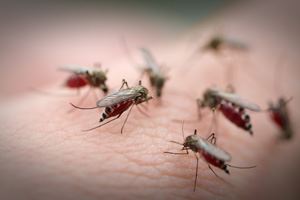 er. That’s half the year and an awfully good case for knowing as much as you can about these little pests. In 2012, there were 20 cases of West Nile reported in Kentucky. Wet hot weather, like this year’s, causes an increased mosquito population. Accuweather.com reports mosquito activity presently at “very high.” This kind of mosquito activity makes the need for protection high as well. Not only from the simple aggravation but also from the diseases they carry. Information makes protection easier.

That’s pretty interesting stuff, but the most important fact that we can bring you about mosquitoes is that professional mosquito protection is the best way to keep them out of your yard. Mosquito Squad of Louisville’s barrier treatment will eliminate 85-90% of the mosquitoes in your yard and make these truly just fun facts instead of needed information. Call us today at (502) 443-9889 for more information about our services!