Zika mosquitoes are in the news again. Last week the CDC released a new map showing a 21% increase in the number of counties where Aedes aegypti mosquitoes can be found. There was also a 10% increase in the number of counties where the Aedes albopictus could be found. Each of these types of mosquitoes can cause an outbreak of the Zika virus under the right circumstances. However, there are differences in the two. Aedes Albopictus is of greater concern in Massachusetts, but see the differences below:

The increase does not necessarily mean there are more mosquitoes than before. CDC research biologist Rebecca Eisen told NBC News that states have heightened their levels of surveillance in the last year, so more mosquitoes are being found. She also notes that just because a mosquito is newly found in a county, it doesn’t mean that it is widespread or that it is carrying disease. And in the reverse just because mosquitoes aren’t found in a certain area doesn’t mean they don’t exist. The CDC believes that Georgia, Florida, and Missouri should have more evidence of Aedes mosquitoes than reported.

Mosquitoes only travel the length of a few football fields by virtue of their own flight. However, it is believed that they often catch rides as eggs in things like plant containers and tires. When the mosquitoes hatch, if the temperature is above 50 degrees, the Aedes aegypti will survive and the Aedes albopictus in even cooler temperatures. So this is one of the ways that it is possible that mosquitoes are ending up in areas they weren’t before.

MASSACHUSETTS IS ON THIS MAP 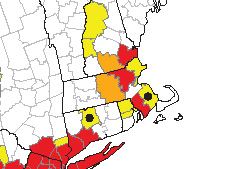 Worcester, Middlesex, and Essex Counties all fall into the category of counties with new activity from Aedes Albopictus mosquitoes. So with possible new mosquito activity, a warmer winter, a wet spring… you guessed it… the mosquitoes are going to be active. And it’s important to be aware of the possibilities when it comes to the diseases they can carry. It’s also a sure bet that you prefer not to deal with the daily annoyance when you are trying to enjoy summertime at home. All of these factors give you a great reason to give us a call at Mosquito Squad of Leominster.

We can eliminate 85-90% of mosquitoes on your property, no matter what type it is or how long its presence has been evident here. Sign up for our season-long treatments and enjoy your summer without mosquitoes. Call today!