You may have noticed that around the third week of September, with the cooler weather, the stink bugs have come out of hiding and are seeking shelter. The increased movement of the bugs has meant more sightings of the brown marmorated stink bug, and unfortunately they are moving into homes. Stink bugs are known for “hitchhiking” choosing to hide in people’s personal belongings and in cars. 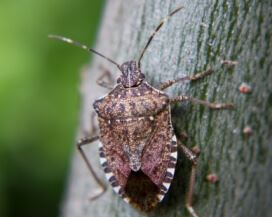 The stink bug population is even bigger this year than last, and experts are saying that we could see a historic outbreak next year. There is a rare “second generation” of the stink bug that is now trailing into homes to remain until next spring when they can lay eggs.

Stink bugs do not pose any serious health threat to people, but are a big nuisance.
However, they can be devastating to farmers, since they feed on crops and some growers have lost their entire crops to stink bugs.

If you have an infestation of stink bugs in your home or on your property, give Mosquito Squad of Montgomery & Howard County a call at (301) 888-5713. We treat for mosquitoes, ticks and/or stink bugs, so you can take back your backyard!