First detected in Pennsylvania in September 2014, Spotted Lanternflies are an invasive species that cause serious damage to trees, crops and other types of plants. They can be found on over 70 different host plants, although they have a preference for the Tree of Heaven (Ailanthus Altissima). The spotted lanternfly causes serious damage including oozing sap, wilting, leaf curling and dieback in trees, vines, crops and other plants. When spotted lanternflies feed, they excrete a sugary substance, called honeydew. The substance then produces black, sooty mold.

The above photo displays 3 different life stages of the insect. The top left captures the early nymph stage (1st-3rd instars). These hatch from eggs and are just a few millimeters in length. As they age, they grow to be ~¼ inch long. They have black bodies and legs, and are covered in bright white spots. They are strong jumpers, and do not have any wings. The top right is a late stage nymph (4th instars) and it is the stage before becoming an adult. They are ~½ inch long, bright red, covered in black stripes with white spots. They also jump at this stage similar to the other three instars. The bottom two photos show the adult Spotted Lanternfly (left with wings closed and right with wings open). When the wings are closed, they can appear to be light pink and that's because of the bright red on the lower portion of their wings. Adults can fly however, they prefer to jump and glide.The adults are about 1 inch long and females tend to be slightly larger than males.

Where do they lay eggs? 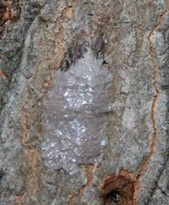 Spotted Lanternfly females lay eggs in rows and then cover the eggs with a protective substance. The covering is white and glossy at first, turns gray/brown when dried, and cracks and fades over time. Sometimes the covering wears off completely, exposing the individual eggs. If nymphs have already emerged, there will be a perfect oval at the top of each egg. Females can lay up to two egg masses containing 30-50 eggs each. Egg masses are usually about ~1 to 1 and ½ inches long and look similar to a smudge of clay. Typically, eggs are laid on flat surfaces such as bark on trees, furniture, firewood, boats, pallets,etc. 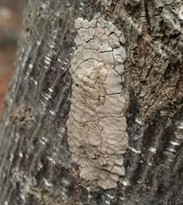 How can I stop the spread?

Removing the source is the most successful preventative measure. Removing only the female Trees of Heaven while keeping the male trees to use as “trap trees” will limit the population of the Spotted Lanternflies. When host removal is not possible, another preventative method you can use is scraping the eggs off surfaces and placing them directly into a ziploc bag of alcohol or hand sanitizer to kill them.

Because each egg mass contains up to 50 eggs, it can reduce the numbers early in the season.

The best chance of preventing the spread to other regions, is to target the populations with the current management techniques recommended.

Issued by the Virginia Department of Agriculture and Consumer Services Office of Plant Industry Services, Mosquito Squad of Hampton Roads is permitted to identify the Spotted Lanternfly.

Be aware to reduce the spread!