In honor of World Malaria Day, we interviewed Kritika Singh, a young college student who has been an advocate for malaria research and prevention since high school!

Kritika Singh was only 16 years old when she founded Malaria-Free World, a non-profit organization dedicated to helping eradicate malaria through education, research, and advocacy. 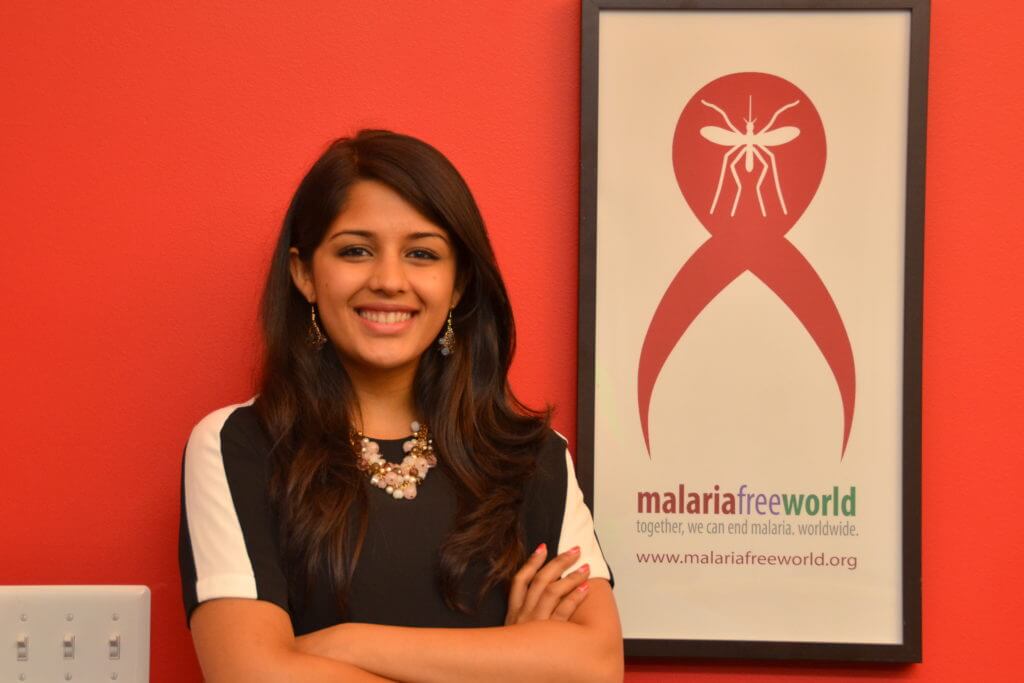 The idea formed in the summer of 2014, as a student at Thomas Jefferson High School in Alexandria, VA, Kritika was encouraged to get an internship. Wanting to explore beyond the DC area, she sent out applications to pharmaceutical companies in Boston.

Acetylon Pharmaceuticals got back to her and took her on as an intern.

Her original plan was to work on cancer research. However, when she got there, they had something different in mind.

“They wanted me to see if the compound that they were working on for multiple myeloma could be used against malaria as well. And that was the first time I encountered malaria,” Kritika said.

Acetylon Pharmaceuticals had Kritika write a grant application to see if they could get funding for the compound. To write the grant, Kritika had to do background research on malaria. It was then she learned about malaria’s harrowing statistics.

“The statistic that stuck to me was that a child dies every 60 seconds because of malaria,” Kritika said. That was back in 2014. Now it’s 90 seconds, but even that number is still distressing.

Another thing that stood out to Kritika was how people would react when she talked to them about malaria. She would call her friends back home, and they would talk about what they were doing over the summer. “All of them were doing Alzheimer's research or cancer, and I was over here doing malaria research. They were like, ‘Why are you doing that? It’s not even important.’”

The statistics, however, indicate otherwise. According to the CDC, 3.2 billion people live in at-risk areas, and the World Health Organization indicates that in 2015, 212 million people were diagnosed with malaria and over 430,000 people died as a result.

Part of the struggle is that malaria is not a common threat in America. Compared to other diseases, it’s a blimp in our radar. However, that was not always the case. Before the 1950s, malaria affected much of the South. It was only due to a concentrated effort to eradicate the disease (led by the predecessor to the CDC, the United States Public Health Service), that malaria was eliminated.

Concerned by malaria’s statistics and its limited awareness, Kritika decided she had to do something. So, she founded Malaria-Free World. In the beginning, it was a program where Kritika and her friends would go to elementary and middle schools and talk to the students about malaria and other infectious diseases.

“If they learn about them when they’re younger, they might be more interested in pursuing them in the future,” Kritika said.

From there, they expanded to social media, and then they started getting contacted by people abroad. So, they reworked their mission statement to include helping people who live in countries affected by malaria to prevent the disease themselves.

Kritika has given speeches and interviews, gone to conferences, and been honored by FOX’s Teen Choice Awards, but she says Malaria-Free World’s greatest accomplishment was their 2015 trip to India.

The trip was funded by an Indian steel company that sent Kritika and her brother, Aaditya, from school to school, giving them the opportunity to talk to over 2,500 students about malaria.

“It was amazing to me to see these students who deal with malaria daily,” Kritika said.

While most of their talks were in English, they also had the opportunity to translate their presentation to reach an even wider audience. “They had some children come to [this] factory, and we prepared a presentation in Hindi,” Kritika said. “That was a team effort.”

Kritika is happy to report that one of the boarding schools where they spoke is now malaria-free.

Looking forward, Kritika sees a lot of hope in the fight against malaria.

“We had malaria [in America], and we eliminated it,” she said. “Which means we know how to do it. It’s just working with other people in [malaria-stricken] countries to make that change happen.”

Today, Kritika is an undergraduate at Northeastern University, majoring in bio-engineering. After she graduates, she wants to pursue an MD-PhD.

“I love malaria research, and I want to be able to apply that research in the field. There’s a large gap between people implementing infectious disease medications and people who are creating them, and I want to bridge that gap,” Kritika said.

Between classes and planning out her future, Kritika is still very involved in Malaria-Free World.

“At Northeastern we have all these research projects where we do service and tie it into what we’re learning,” Kritika said. So she’s working to establish Malaria-Free World as one of those projects.

If accepted, over summer or winter break, a team would go back over to India to talk to kids about malaria.

Another project that Kritika is working on is planning a Global Health Research Conference in the Fall of 2018. “Northeastern has a global health department, but it’s very new. They haven’t had many big events,” Kritika said.

The conference will center around students and give them the chance to talk about their research and what they’re doing. It’s the first student-led global health conference at the undergraduate level, and Kritika is excited to be a part of it.

Make the World a Better Place—No Matter What Your Age

To high school students who are looking to make a difference in the world, Kritika encourages them to pursue their passions.

“Age is just a number,” Kritika said. “If you feel like you’re younger than everyone else, you’ll seem younger. But if you think that, ‘Oh, I can talk to all these people who are older and more experienced,’ you’ll be able to talk to them. They’ll see you as someone who is young and passionate, and they’ll want to help you.”

If you’d like to get involved with Malaria-Free World, Kritika encourages people to join the Malaria Masters program. Malaria Masters gives people of all ages the opportunity to help spread awareness about malaria in their community. Currently, Malaria Masters has student ambassadors all over the world: including India, Nigeria, and Sudan.

If you’d like to learn more about Malaria-Free World or volunteer, visit malariafreeworld.org.