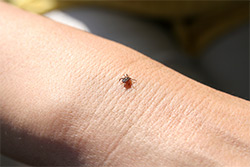 WSET news published on June 23, 2014 an article discussing a stern warning from Tufts University scientists about the potential for a “tick boom” this summer. The jump in the tick population is attributed to abundant snow and a wet spring, which created ideal conditions for this tick boom. According to Tuft’s Professor Sam Telford, “the large amounts of snow this winter acts like a blanket to protect ticks. Plus the wet spring kept ticks from drying out.” The most concerning aspect of the impending tick boom is that it especially applies to the type of ticks that carry Lyme Disease. 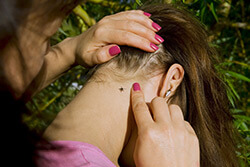 According to another article, “June and July are the peak season for the tiny, hard to see nymph ticks which are believed to be the main vector for transmitting Lyme Disease”. The larger issue with the nymph tick is the size of the bug itself. The nymph tick can be especially hard to locate and it is possible to have a nymph tick on your body the size of a comma and, therefore, overlooked as being a freckle, or speck of dirt. Because of this, it is very important to check your body daily. With the expected explosion in the tick population imminent, protecting yourself from ticks should be the primary concern.

There’s nothing like a tick boom to inevitably lead to an uptick in Lyme disease. Adding to the difficulty on reporting the statistical analysis of Lyme Disease, the Centers for Disease Control and Prevention believes that “only 10% of the people infected with Lyme disease are accurately diagnosed”. In Maryland in 2013 there were 1,194 cases of Lyme Disease reported, however, the CDC estimates actual cases in Maryland were approximately 11,000. The need for tick control is higher now more than ever. According to the Centers for Disease Control homeowners should “Consider using a professional pesticide company to apply pesticides at your home” to protect from ticks in your yard. If you have any questions or concerns related to tick control and how to protect you and your family from ticks, give Mosquito Squad of Frederick a call at (301) 804-6972