When you think of ticks, what do you think? Gross? Definitely. Hard to see and detect? You bet. Lyme disease? Absolutely? Paralysis? Probably not. These little buggers can be very dangerous to our beloved pets, and it isn’t just Lyme disease and ehrlichiosis, they can cause paralysis too. 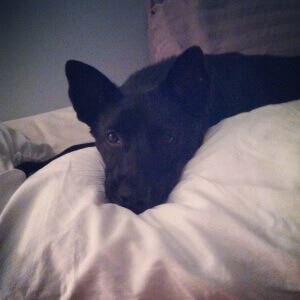 My mother and I are dog lovers. That’s my man, Wiley, to the right. I’m a sucker for his ears, but I digress. Recently my mom was telling me about a friend who has a dog. Their dog Buster had always been healthy and active, but in a matter of just 5 weeks had lost nearly 30 pounds and wouldn’t go on walks. After several tests and visits to the vet, they found the culprit. Ticks. The poor pup had 3 or 4 ticks under his armpit, a very difficult spot to see and check. They were causing the issues.

Ticks, when they aren’t noticed and removed quickly can cause paralysis in dogs, and sometimes even humans. Some ticks carry a toxin that is released into their host while feeding. That toxin affects movement control.

It’s important that dog owners thoroughly check their dogs for ticks after spending time in areas where ticks are known to live. The toxin may be released after 3 days of attachment. Luckily, when the tick is removed, the symptoms of paralysis will subside. Buster recovered quickly and is back to his normal self.

Ticks checks are an important piece of protecting your pet from tick-borne disease. To check your dog, pet it slowly while applying more pressure than normal. Many times, you will feel a bump that you can then look closely at. Make sure to check their elbows, inside of their legs and in between toes. Those are often ticks favorite hiding spot on a dog.

At Mosquito Squad, we protect pets with our effective tick control. Our tick services include a combination of our barrier spray treatment and tick tubes. The spray eliminates ticks on contact while the tubes get them earlier in their lifecycle.

If you’d like to discuss reducing the number of ticks on your property, please contact your local Mosquito Squad office.