In October of 2016, I had the opportunity to travel to Cameroon with Malaria No More. This is an organization that Mosquito Squad has supported since 2013, and when I heard that I could go and see how the donations are being used, I signed up right away.

I have never traveled to Africa, and it was not as easy as just hopping on a plane to New York! I had to get a Yellow Fever shot, a battery of other vaccinations, apply for a passport and visa, begin a regimen of anti-malaria medication, and then travel for about 36 hours before we finally touched down in the capital city of Yaoundé.

In case you don’t know where Cameroon is, it is on the West coast of Central Africa. It has a population of about 22 million, with several major cities, including Yaoundé and Douala, both of which we visited on the trip. The major languages are French and English, and there are hundreds of local languages. Paul Biya has been president since 1982, which means that the government is pretty stable, but it is also authoritarian.

The literacy rate is over 70%, although the rate isn’t quite as good for girls as it is for boys. Most children have access to state-run schools and the country has one of the highest school attendance rates in Africa, with the southern part of the country performing better than the north. The quality of health care is generally low, with only one doctor for every 5,000 people. Outside the major cities, facilities are often dirty and poorly equipped.

One of the most shocking statistics about Cameroon, though, is the life expectancy at birth, which is estimated to be 54.71 years in 2012, among the lowest in the world. I’m looking forward to living to the ripe old age of 100 (at least), so the idea of most people dying at just over 50 is frightening.

The Bill & Melinda Gates Foundation, which also supports Malaria No More, has done a great job of educating the world about how deadly malaria is. This graphic made the rounds on social media and it shows clearly that more people are killed every year by mosquitoes than by any other animal. The reason they are so deadly is not because they have teeth and claws, but because they carry diseases, and the most deadly disease by far is malaria.

Malaria threatens half the world’s population and kills nearly half a million people every year, most of whom are small children and pregnant women. It is transmitted by the Anopheles mosquito, which is a genus, just like the Homo in Homo sapiens is a genus. There are about 460 species of Anopheles mosquitoes, and we do have them here in Texas. The most important species are Anopheles gambiae, because out of the 30-40 species that transmit malaria to humans, these are the most efficient. That has to do with several factors. First, they do a good job of incubating the malaria parasite while not suffering any ill effects, second because they feed primarily on humans, and third because they can breed really well in water sources that are readily available around humans.

The Anopheles gambiae is is mostly active at night, between 10pm and 4am, and it’s a pretty skittish mosquito, which means that if you move it will fly away, so it really likes to bite sleeping people. It prefers to bite indoors, and it also prefers to rest indoors when it’s not busy biting people or laying eggs.

Malaria causes symptoms that typically include fever, fatigue, vomiting, and headaches. In severe cases it can cause yellow skin, seizures, coma, or death. In addition to killing people, it is one of the leading causes of school and work absenteeism in areas where it is present. The economic burden of malaria across Africa has been estimated to be as high as $12 billion, and I saw one estimate of over $4 billion per year for Cameroon alone.

Malaria No More is a nonprofit organization established in 2006 that aims to eradicate malaria by 2040. In the United States, mosquitoes do occasionally transmit diseases that hurt and kill, but for the vast majority of us they are just a nuisance, and we treat our homes and yards because we want to be able to enjoy the outdoors without getting a bunch of itchy bites. Mosquito Squad felt a responsibility to try and help in parts of the world where mosquitoes are a much bigger problem, and that led to our partnership with Malaria No More.

Through the efforts of Malaria No More and other organizations working on the problem, malaria mortality rates have fallen 58% among children under five since 2000.

What are the things Malaria No More is doing?

One of the initiatives for Malaria No More in Cameroon is neighborhood cleanups and education. They work with local organizations to identify mosquito breeding areas and clean them up, and I was excited to see this in action. Our first trip was into this neighborhood in Yaoundé, where a depression had been accumulating water and garbage in between all of these homes. Malaria No More and a local youth group teamed up to bring in wheelbarrows and shovels, take away all the trash and level it out so that the water wouldn’t accumulate anymore. 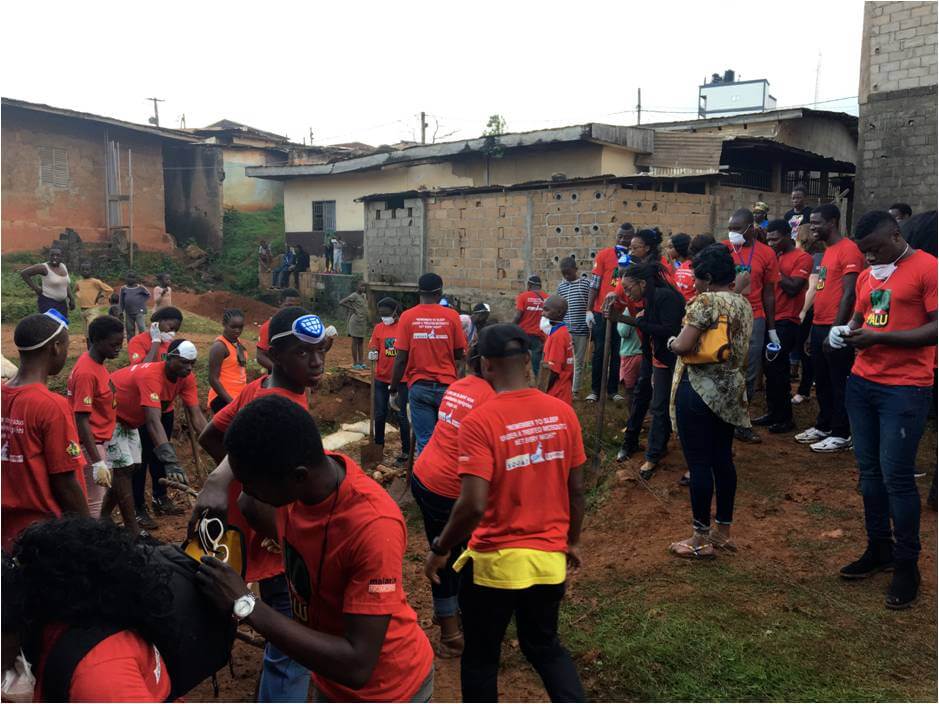 After the cleanup was done, there was a rally, with drums and music. Music is a really important part of Cameroonian culture, and it was really interesting to see this all happen. All of the kids and the families came out to listen and participate. First they had a demonstration, where Malaria No More educated everyone on how malaria is transmitted, what to do when someone gets sick, and how to use a bed net. You can see that they got a couple of girls to demonstrate how to set one up and sleep under it. They showed them how to tie it up at night, how to clean and repair it, and reinforced all the reasons why bed nets are so important. There was a lot of call and response, where the leader would say, “how often do you need to sleep under a mosquito net?” and everyone would reply, “every night!” Then the leader would walk up to one of the mothers and get her to answer questions on the microphone for everyone to hear. 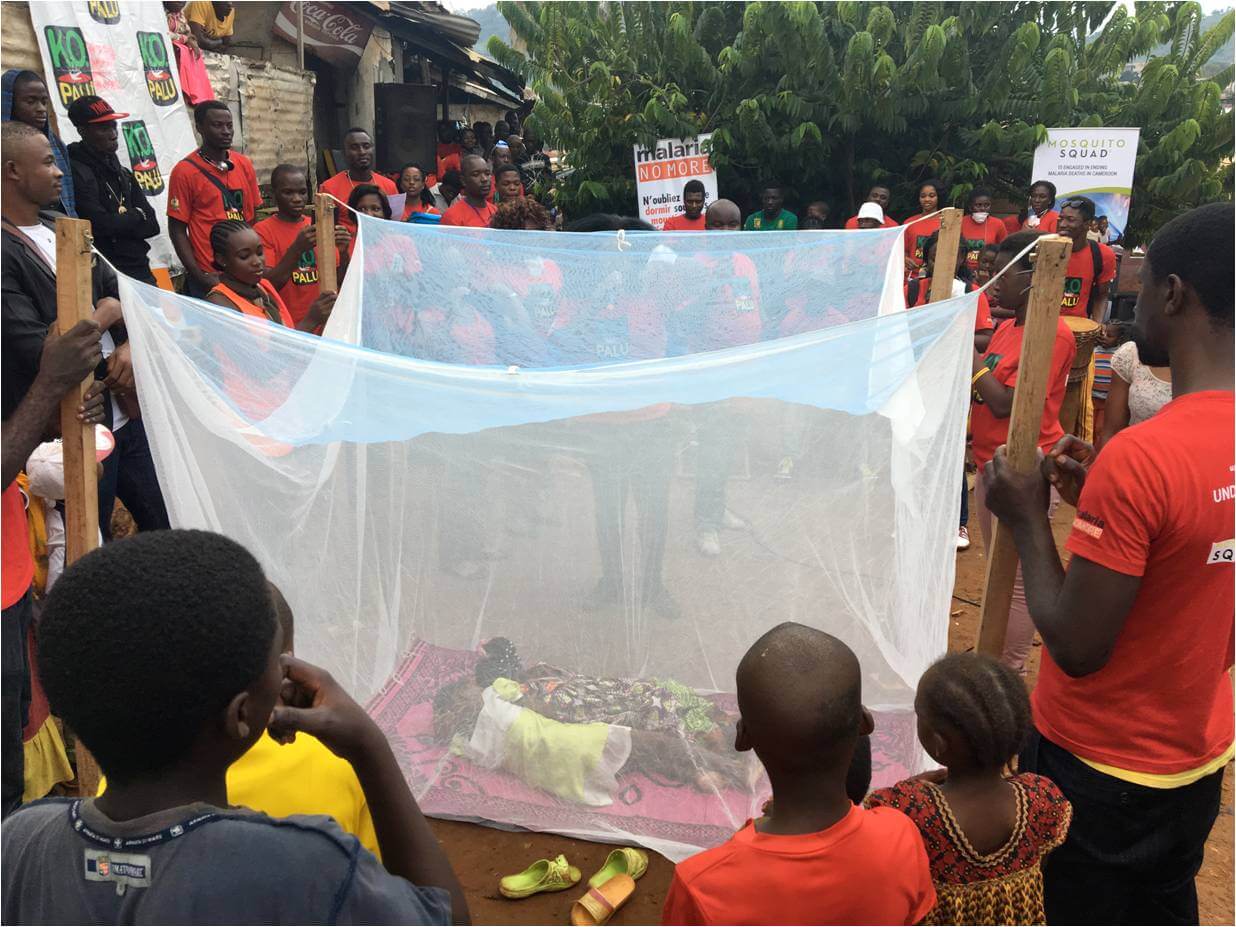 Once that was done they played the K. O. Palu Anthem, which everyone knew and joined in singing, and it turned into a street party! K. O. Palu means Knock Out Malaria (Palu is French for malaria) and It really struck me how effective this was given the culture. I’m not sure this type of thing would be as effective in the US, but in Cameroon it’s really a smart strategy! The K.O. Palu Malaria Anthem features Cameroonian artists Xmaleya, Sine, Grace Decca, Duc-Z, and Kate. It’s really well known, and a great way to reinforce all of the messages that Malaria No More is trying to get out there.

Another Malaria No More initiative is to work with orphanages, where they can educate and protect a lot of children at once. So we visited two orphanages during our trip, this one in Limbe and another near Douala. Malaria No More had already been there and all the kids have bed nets already, but the orphanage helps out a lot of widows in the area, so we were there to reinforce the message and also to give out bed nets to the widows so that they and their children will be safe from malaria. As in the neighborhood cleanup, there were songs and dancing, call and response, and a lot of fun. I really enjoyed getting to get close to the kids and talking with them. 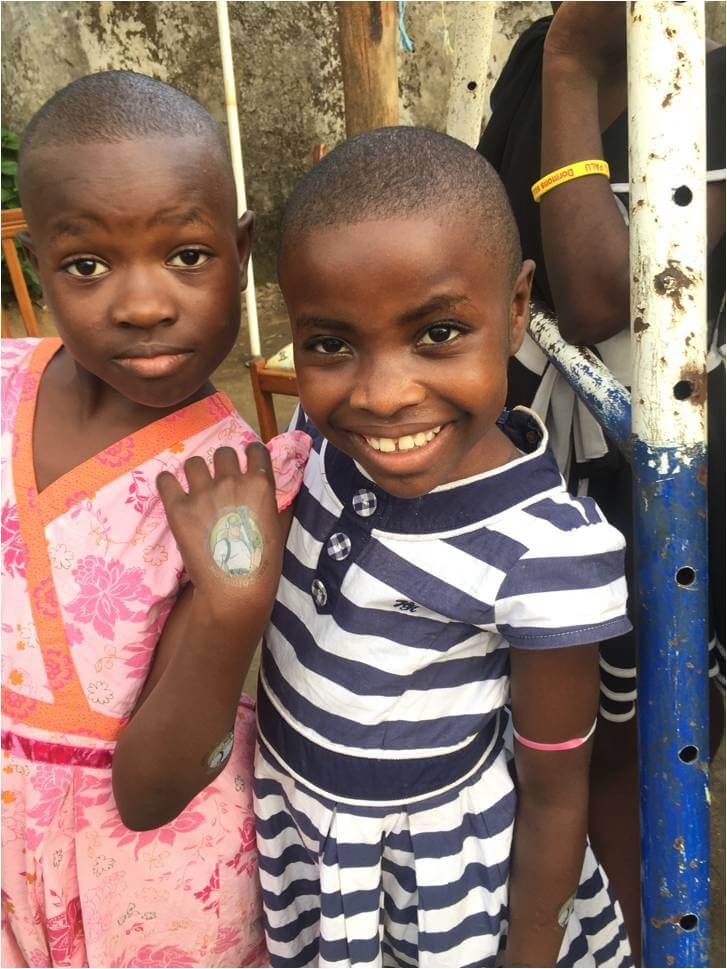 In Cameroon, these tactics and others have inspired more than 500,000 people to sleep under mosquito nets. And when a child dies every two minutes from malaria, it is urgent that we keep working hard to spread the message. 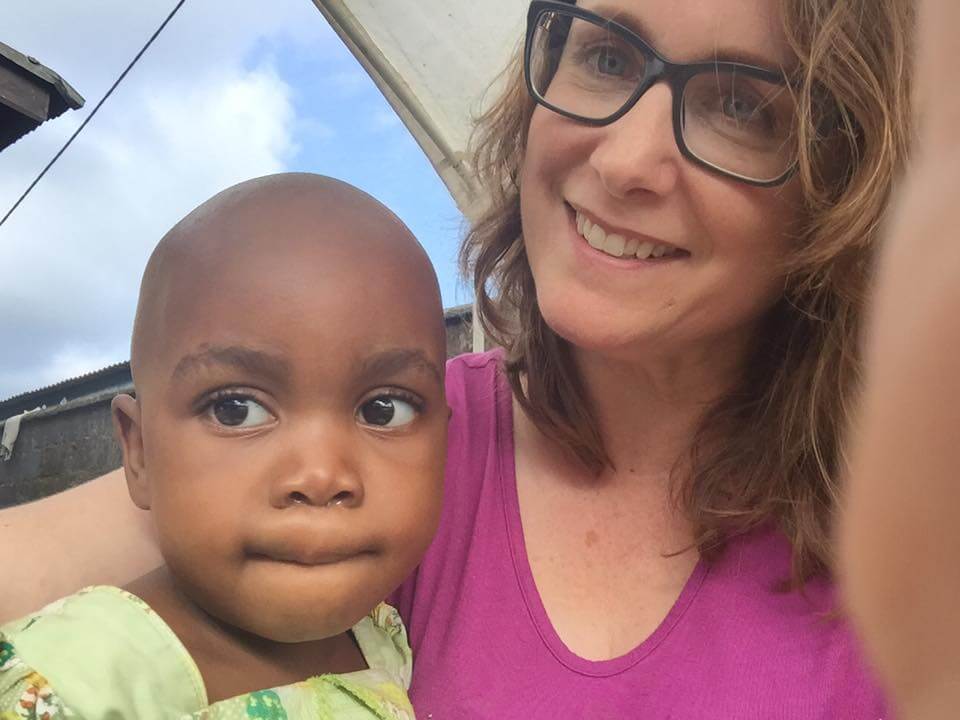 We also visited a local school and did a program there, and Malaria No More recently sponsored a contest in a group of schools to create videos about malaria and all of the educational messages that they are trying to get out there. They got something like 800 responses, and I have links to two of them that are really great! You may have heard that when you see a message you only retain a fraction of it. When you see and hear the same message you retain more, but if you learn it and teach it to others, the results are even better. What a brilliant strategy to engage kids and teach them what they need to know!

There are a lot of great organizations out there doing good work in the world, and I’m happy that my company is associated with one. We donate as a company, many of my customers donate and I give a dollar for each customer each year.

Here in the U.S., even with the threat of West Nile and the threat of Zika, mosquitoes are still really just an annoyance. But in other parts of the world they are a much more serious threat. I believe that with continued hard work and focus, we really will see the eradication of malaria in our lifetime, and save the lives of millions of people.

If you would like to join this fight, you can go to swatmalaria.net and make a contribution.